What’s on in September

What’s on in September – 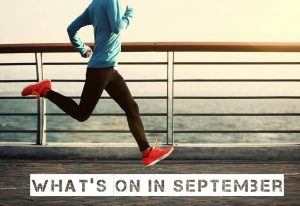 For those racers raring to go after a quiet August, there’s an event every weekend in September! Probably the most popular race of the month for Cybi members is right at the start, on the 3rd, for the classic Caernarfon 10k. This race is part of the Club champs and involves a circuit of the Foryd and Llanfaglan. The race has been run both clockwise and anti-clockwise over the years, and whilst by no means is it a hilly route, but there’s definitely enough inclines in there to make it a testing course. Being so close to the sea, the weather also plays a big part in how fast the times are on the day. The course records currently stand at 31:02 by Cardiff AC’s Michael Johnson in 2008 and 36:26 by Lizzy Hawker in 2007.

The Cybi social run schedule for the month is Bryngwran (6th), Llangefni (13th), Holyhead (20th) and Menai Bridge (27th) and as usual, every Monday at 6:30 the Club’s structured training session will be held at Llangefni High School.

Saturday 2nd of September was a nice sunny summers day, unfortunately Sunday 3rd was more like winter, wind and rain. Luckily most Cybi’s running the Caernarfon 10k have had plenty of practice in these conditions during the summer. Arriving at the start, it is hard to see Anglesey, but by the time all the runners were ready to start at 11:00 the rain had eased to a light drizzle.

The route went clockwise this year with the runners heading towards the Castle from the start, this also meant that what little hills there were appeared in the first few kilometres. Then it was back along the seafront to the finish. Andy Savage had a good run winning his category in the race and also taking gold in the North Wales Championships. Peter Jones took silver, Chris Thomas Bronze in their age group for the North Wales Champs, With Diane Holmes also gaining silver in her age group. Other club members who had good runs were, Nigel Holmes, Kevin Clark, Rhi Willmot and Dewi Williams. 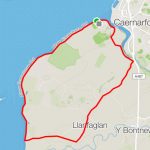 What’s on in August: 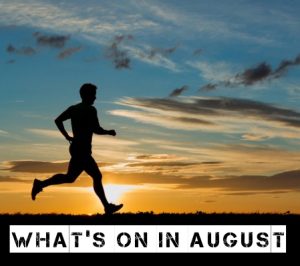 After a busy few months, August is a relatively quiet month for racing, but there’s still a good mixture of events in the area, from super quick road races, to long runs in the hills.

The first local race is a tough 10 miler, the Maesgwm Muddle, on Saturday the 12th. This is a longer version of the Moel Eilio Race, and in reverse. It is a British Champs race so is sure to feature some very good local runners as well as those from further afield. Next up on the 19th of August at Towyn, is the 34th running of the classic Race the Train, a 14 mile cross country race against the Talyllyn train. In addition to the main race, there are three other shorter distances to choose from, and the atmosphere in Towyn takes on a festival feel as hundreds of runners descend on the South Gwynedd seaside town.

One of my favourite races of the summer is back on the 23rd after a year off, and I’d recommend everyone give the community organised Ras Y Mynydd a go. Starting from the Mynydd Llandygai Community Centre, the race circles Moel Y Ci over an undulating 4.5 miles on a mixture of trail and road. Afterwards there’s the opportunity to grab a cup of tea and a cake in the Community Centre. What more could you want from a race!?

Unfortunately on the same day as Ras Y Mynydd, there’s a clash with what looks like being one of the month’s most popular events – the Plas Menai / Caernarfon 5k, a super quick dash along the flat cycle track on the banks of the Menai. A great race for PB chasers, there will no doubt be a good turnout from Cybi Striders at this one, but be careful you don’t miss out, as it’s sure to sell out quickly!

Training wise, this month the Club will be in Menai Bridge on the 2nd, Llangefni on the 9th, Bryngwran on the 16th, Holyhead on the 23rd and back to Menai on the 30th. All at 7:00pm. As usual, the Club Speed / Tempo session will be on every Monday at 6:30pm, save for the 28th which is a Bank Holiday.

The weather stayed fine, though a little bit windy for the 2017 Breakwater Race.

The race was started by the firing of a canon at 13:00, which set the runners of on this flat course.

The route took the runners along Beach Road, before turning left and heading towards the Breakwater Park, at about the 3/4 mile point they turned right and ran towards the start of the breakwater with the wind helping them along. From just beyond the 1 mile point the runners were on the breakwater (running on the top section) heading to the lighthouse at the end, which can be seen from almost every part of the route. As they turned at the 1/2 way point the wind, that had been at their backs up to now, became an energy sapping  head wind for the next mile and 1/2. Turning left after the coming off the breakwater the runners head out of the County Park and back down Beach Road to the Finish

Some photos from today

Thank you to our sponsor Thomas Hanson Flooring for providing mugs for all the runners, and Stena Line, The Valley Hotel, The Anchorage, Driftwood Restaurant, The Cheerful Mexican and KFC for providing excellent prizes for the winners 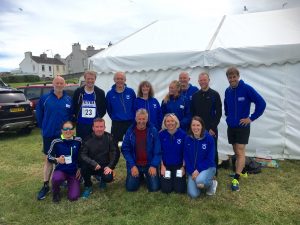 Jason Thomas and Russell Williams traveled to Wrexham for the popular Helena Tipping 10k  on the 30.7.17. On a warm day Jason completed the course around the Wrexham Industrial Estate in 38.58 and finishing in 31st place with Russell following in 49th position in a time of 40.36.
Parkrun results : Dyfnallt Huws 21.19,Josie Rhisiart 34.21,Chris Williams 42.09

Gethin Jones good form continued when he won the Burnley 10k today in 32.59. This completes an impressive hatrick of victories recently  with recent wins in the Deganwy 5 and the Blackpool 10 mile race.

The Abersoch 10k is a popular race with members and Jason Thomas was the first Cybi at yesterdays race in 40.50. David Ellis was next in a time of 44.42 followed then by Kevin Clark in 47.41 and Dewi Williams in 51.49.

Ryan Roberts returned to racing after the London Marathon and finished an impressive 4th at the Liverpool Rock’n Roll Half Marathon in a time of 1.14.00.