Dewi Williams became the latest club member to take part in the Barcelona marathon. Dewi completed the course in 4.30 and he thoroughly enjoyed the race and experience . With his family there to support him Dewi also raised over a £1000 for 2 worthy charities ,being the Alzheimer’s Society and Awyr Las. Well done Dewi on both the running and raising money front !

On the same day Edith Gruber made a last minute decision to enter the Wrexham marathon. Whilst Edith used the race as a ‘training ‘ run for the upcoming London Marathon her finishing time of 3.45.02 got her a silver medal in the North Wales Championships and suggests she is in for a good run at London.

Rhayader Round the Lakes 20

There are not that many 20 mile races around but these are ideal preparation for a marathon. Sue and Alun Jones traveled to Rhayader for this race yesterday. Not sure if the race is as  ‘ pleasant ‘  as the title suggests as the scenic course has been reported to be quite tough and demanding ! Sue finished in 3.25.54 with Alun in 3.45.37.

Cybi gave a good showing at both these races coming away with a number of individual prizes. In the 10k which was an out and back race Gethin Jones finished 3rd in 37.11. Dewi Williams completed his preparation for next weekend’s Barcelona Marathon with a fine run to finish in 49.10 and Chris Williams ventured away from the Penrhyn Parkrun course to push the buggy around the course in 1.00.19.

Ryan Roberts finished in 3rd place in the half marathon in 1.14.16 as his progress towards the London Marathon continues to go well. There was a battle then for the next Cybi placing between Peter Jones,Chris Thomas and Jason Thomas. Not much separated them coming out of Beaumaris but Peter Jones finished strongly to finish in 1.28.20 (PB?), ahead of Chris Thomas in a PB of 1.28.38 and Jason Thomas in 1.29.13. Impressive times were also recorded by Dyfnallt Huws and Rhi Wilmot who finished in 1.40.40 and 1.40.49 which again could be PB’s for both (and maybe half marathon debut’s?). It was a good day also for the Holmes household with both Diane and Nigel finishing in the top 3 in their respective categories.

What’s on in March

It’s hard work training in the weather we’ve been having lately, but for those preparing for this month’s main event, the Anglesey Half Marathon, we hope you’ve got the miles in and are ready to tackle the route from Menai Bridge to Beaumaris and back next weekend (5th March). This year, for the first time, the organiser’s are also holding a 10k race alongside the half, and this has proven so popular, it sold out weeks ago.

In addition to the Anglesey Half, Sunday also sees the fourth race in the Borders League series, this time hosted by Helsby RC. The race will be held at Manley Mere (WA6 0PE) and the route is about 5.1 miles of country lanes. Due to the clash with the Half, there won’t be a club mini bus for this race, but check Facebook as there may be a car share arranged.

Other races this month include the Loggerheads Trail race and the new Conwy Mountain Fell Race on Saturday 11th (head for heights required for Conwy!), Wrexham Marathon and the Waunfawr 5k on the 12th, and on the 19th, the Llandyrnog 10k and the Resolution Run Cymru, a new charity 5k at Newborough Forest.

The Rhyl 10 mile race took place yesterday and the usual wind for this race did not disappoint . Sue Jones won her category in a time of 1.28.19. Alun T Jones was not far off a category prize also in finishing in 1.41.1.5 and it was good to see Jason Thomas returning to racing and finishing in 1.09.26. 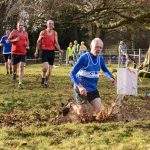 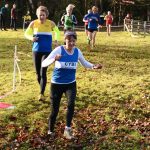 Facts about the Club Championship

With the club championship nearing completion, here are some some facts about the 2017 championship races, which I hope will be interesting to our members.

A total of 39 club members have raced at least one race out of the 20 races which were selected to be included in the club championships this year.  Over the 20 championship races this averages out at just under 9 runners per race.

With only four races remaining, it look like the only race where there will be no club representation will be the Wrexham Marathon on the 12th March 2017.

The club championship races have ranged in distance from 5k/3miles (m) to 42k/26m, and a breakdown of the races are below (number of participants in brackets):

The championship included weekend and evening races with a mixture of road and trail/XC surfaces, and a breakdown of the races are below:

Apart from the Wrexham marathon (no entries), the races with the least club entries are the Fairy Freckled Cow Trail Race and Rhyl 10m race with 2 club members.

The races with the most club entries were the Race the Train and Breakwater race with 15 club members.

The Penrhyn Parkrun attracted 16 club members, however as members had the whole of December to complete the run, I have not included it, due to that fact that the race was not run on a single day.

If individuals ran the minimum 7 races as part of the championship the shortest distance they would have covered would be 41k/25.5m for the ladies and 45k/28m for the men (difference due to XC ladies and men’s course lengths).  The longest distance would be 137k/85m.

The projected total distance covered by club members in championship races will be 1664k/1034m (if nobody withdraws from the remaining races).

Sorry for the delay in putting the Cross Country results up.

Ryan Roberts was the sole Cybi runner at the North Wales Cross Country Championships at Rhug,Corwen on the 28.1.17. Ryan finished in 7th position which was even more impressive as Ryan was in a period of heavy training as part of his preparation for this year’s London Marathon.

The following week Cybi’s Mr/Mrs Cross Country, Nigel and Di Holmes traveled to Oswestry for the North Wales Cross Country fixture there. Nigel finished in 118th and Di in 77th. Both have had very consistent runs throughout the season at these races.

Nick Beer 10k – It was good to see that 3 Cybi runners was selected for the North Wales team for this event which also took in the Wales Inter-Region 10k. On a windy day Ryan Roberts finished an impressive 7th in a quality field in a time of 33.31 with Gethin Jones finishing in 36.25 and Michaela Owen in 47.40. It was also good to see a number of Cybi runners take part in this race which takes in the Great Orme and a fast run in back down to Llandudno. Not sure if the wind helped or hindered the runners today tho !

Sorry for the delay in posting these !

The Cybi ladies team enjoyed good results at the latest Border League fixture at Connah’s Quay on the 22.1.17. Over a 4.4 mile course Edith Gruber finished in 36th place, Michaela Owen in 44th place and Elen Jones in 57th place. The team placed 3rd on the day consolidating their place in 4th place in the league. In the men’s race Andy Savage recorded another good Border League result in finishing in 34th place and Sion Williams recorded an impressive 62th place overall ( in his Border League debut ?)which was good enough for 4th place in the under 20 category. Other Cybi results : 92nd Irfon Rowlands,133rd Ian Mulligan,201st Nigel Holmes,250th Andy Edwards,259th Kevin Clark,270th Paul Maitland.
Gethin Jones continued his good form in finishing in 2nd place at the Penrhyn Parkrun on the 28.1.17. Andy Savage was next in,finishing in 3rd place.Other Cybi results : 28th Sion Roberts,37th David Mortimer,38th Kevin Clark,114th Chris Williams.